Check me out. I’m expanding beyond the world of avocado smash and cold-filter coffee, to something even cooler; Ice cream. Or as Eddie Murphy so very aptly puts it:

Don’t know what the fuck I’m talking about? Educate yo’ self, fool.

I’m also talking about Gelato Messina in Fitzroy, which is by all north side standards, the only place to get your sub-zero dairy intake. Messina has taken what I grew up eating in traditional Italian restaurants, injected some modern flavours (usually in the form of peanut butter and a pop-culture reference), and is now serving it to half of Melbourne along side a deep house soundtrack. Who the fuck wants dessert at Trampoline these days? Messina has done some things well.

Messina is also pretty hip. They achieve this by featuring an interior red-brick wall (probably spending a lot of money to make it look unkempt), and some 1950s-Diner style signage. They feature some 30 odd flavours, and will probably give you free tastings. The rest of the store is lined with some funky mod style seating, and obnoxious customers all Instagramming their frozen $6 purchase and their face. Myself included. 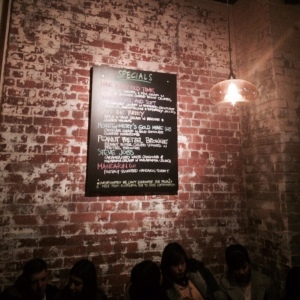 But what really distinguishes Messina from, well, every other gelato dispensary, is their blend (and title) of flavours. A featured flavour for this month is called the ‘Steve Jobs’. There’s another called ‘A Gay Old Time’. They all involve biscuits or marmalade or something a bit unusual, and I’m sure many people have ended up asking for A Gay Old Time with Steve Jobs, and had a little giggle (good one, Messina). My personal favourite is the Banana Split, for no particular reason other than it’s the fucking bomb.

Also upon throwing myself into the fiery depths of UrbanSpoon reviews (an important part of the #OccupieFitzroy process), I did begin to struggle with some of the moronic statements being offered, and so I feel it’s my duty to offer some clarity around these words (this is the internet, after all). UrbanSpoon user Madbitchdrags (yes, really), said that “It’s just like being in Italy!!!!!!”. Despite never having been to Italy, there is a seed of doubt lodged firmly in my mind that Gelato Messina is not, at all like being in Italy. Correct me if I’m wrong dear followers, but amidst the cobblestone pavements and 16th century cathedrals , I don’t think there is a line of 50 outside a Gelato store, iPhone in hand, ready to order A Gay Old Time with Steve Jobs for $6. I just don’t.

Perhaps this calls for a new Occupie Fitzroy section: The Spoons of UrbanSpoon.

Door to Beard Index:  When the population of a small town has decided to buy gelato at a Fitzroy venue, statistics say that there should be a beard in there, somewhere. Despite the decor, the hipster index is diluted.

Coffee: They have it. I haven’t tried it.

Noms: Their flavours are entirely phenomenal. Who wouldn’t love A Gay Old Time with Steve Jobs? Or is that getting weird now?

How poor will it make me? The best part. 6 buckaroos for two flavours. It’s a good life.

Is it instagram worthy? I think most Messina-related Instagrams are of the queue that extends half way down Smith Street, and their soon-to-follow empty gelato cups. I’d argue that it’s still worthy of your Instagram time.

Final thoughts: They get through their hideously long queues very efficiently. They only take cash which is annoying as fuck. Their website looks like it was designed by a 16 year old who just discovered WordPress. Their ice cream will change your life.