We are beginning with a Fitzroy classic, Bimbo Deluxe on Brunswick St. 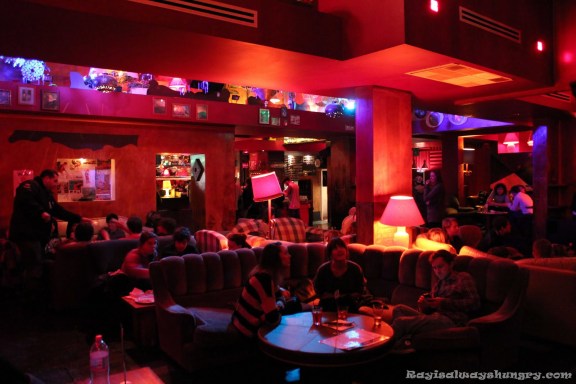 http://www.bimbodeluxe.com.au/
I’ve personally always found this place to be pretty good. Seconds after locking your fixie to a fence around the corner, you can see that this place just screams “fuck you…. we’re cool”. It has really sexy/dungeon-esque mood lighting, super freaky baby doll decor, and couches that are easy to get stuck in. It definitely clings onto the grunge that was once so pervasive in Fitzroy, and in parts closely resembles a cave. In fact, it actually has a cave.
The pizzas are often cheap and always amazing, with plenty of options for vegetarians like myself. However, eating said pizzas has proven difficult whilst being stuck in a couch, and at times I have ended up with a lap full of mushrooms (a warning for those lazy pizza eaters). I assume there is other food available, however when $4 pizzas are on the menu, who really gives a fuck about the salad.
Bimbos also do vodka infused with cool flavours, like watermelon and chili. It hangs in big vats above the bar, amongst even more freaky baby dolls. I assume it’s tasty, however a vodka-aided hangover from 2009 still lingers in my mind, so I no longer touch the stuff.They have the normal beer selection, and a fancy beer selection, of the ‘normal’ Fitzroy prices (see: ‘fuck drinking here is expensive’). Their cider (the only thing I’m usually concerned with) is great, however it was served to me in a fucking schooner. One of few downsides to this place: if I wanted a schooner I would go to fucking Sydney.

Occupie Metrics:
DBI: 3.0- This place has fierce beards, and many of them.
Noms: $4 pizza during certain times. Seeing as it’s $4 and it’s pizza, it is definitely good.
How poor will it make me? Food, not very. Drinks, probably. Because of those fucking schooners.

Final notes:
I visited this place on a Monday night. Like any bar, Monday nights are pretty chilled, kind of the way I like them. However a Saturday night is very different and seems to get filled with the kinds of people I actively try to avoid. Moral of the story: visit at your own risk, but it will probably be awesome.